Located on the road to the beaches of the Landing beaches, between Arromanches and Ohama Beach, Camping** de La Prairie in Port en Bessin will be the ideal starting point for exploring the thousand faces of Calvados, between sea and bocage.

The City of History for Peace, an unmissable site...

Caen, bombed in the summer of 1944, a city martyred by the liberation, deserved to be paid tribute commensurate with what it had endured.

As early as 1969, Jean-Marie Girault submitted the idea of ​​a museum devoted mainly to the Second World War. The Caen Memorial will be inaugurated on June 6, 1988 by François Mitterand.

From the origins of the Second World War to the end of the Cold War, the different routes tell and explain what was the terrible history of the 20th century.

The building occupies the location of the command bunker of German General W. Richter who, on June 6, 1944, opposed the Anglo-Canadian troops.

The Caen Memorial also opens onto 35-hectare gardens, American, Canadian and British gardens which are a tribute to soldiers who died in the war. 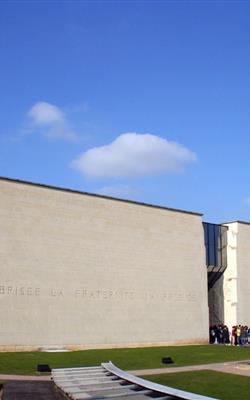